The Mayor of London, Boris Johnson, today announced that the currently empty site of St Clements Hospital in Mile End, east London, will be the UK’s first ever urban Community Land Trust – what is a land trust? – see here or click here to sign up for Land Trust newsletters.

The development will see the freehold of the entire site being held in trust for the local community – which will preserve the value of the land for the community forever. Some of the homes will be directly owned by the East London Community Land Trust and the residents will have direct involvement in the management of the whole neighbourhood as well as a big say in the design. The development will preserve a number of important historic buildings, including the nineteenth century, grade-II listed workhouse. 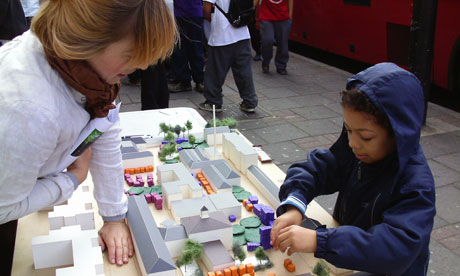 Mayor of London, Boris Johnson, said: “The East London Community Land Trust at St Clements will put local people in the driving seat and empower them to take stewardship of what will be a fantastic new neighbourhood that will boast over 200 quality homes”.

The announcement marks the completion of  a long tender process, administered by City Hall. which saw a number of developers compete for the 4.5 acre site. Although not initially part of the same bidding team, local residents, through the East London Community Land Trust, and Galliford Try have been in negotiations since March this year about the possibility of working together, after both their proposals impressed the Greater London Authority (GLA).

The two have now come to an agreement, whereby the freehold of the entire St Clements Hospital site is set to be transferred to the local trust once it has been restored, with the CLT also owning all of the affordable for sale homes, and Linden Homes (part of Galliford Try) administering the commercial side of the development on a long lease from the CLT.

The true CLT idea proposes full community control with the possibility of setting house price levels – £125,000 for a family home (you buy the bricks and the land stays in trust) It works like this…

If you bought a CLT home for £100,000 and in 10 years time it was worth £200,000, you would sell it back to the Trust for (roughly) £125,000… and they could then sell it at this discount to the next family. You basically trade an upfront subsidy for a diminished return, remove speculation on land value and invest in housing for homes not for profit. The site will deliver a fully mixed community by managing a significant number of social-rented homes, which will be charged at ‘target rents’, which are below the new ‘affordable rent’ level, which could have been up to 80% of the market rate.

Some of the buildings at St Clements will be opened to the local community as soon as possible, with the CLT working with the developer  to provide ‘interim use’ facilities on the site, for use by local groups whilst the homes are being constructed.

“I certainly got the impression from our first meeting with Linden Homes that they were proud to be a part of the first urban CLT at the St Clements site. Hopefully the first of many promised by Boris Johnson over 4 years ago . This project will bring many benefits to Mile End beside just affordable family housing as if that was not enough”.

“Today’s announcement marks the start of a new and exciting chapter within the proud history of east London. Community Land Trusts are about building homes for local families – not match boxes to be bought and sold like any other commodity. Through local people helping to design them, we are going to create spacious, secure, beautiful and permanently affordable homes.”

‘At last Londoners will start to have a choice to live in safe, genuinely affordable homes rather than seeing the housing stock around them turned into other people’s investments. I see St Clements Hospital Community Land Trust as a glimmer of hope in this national housing crisis.’