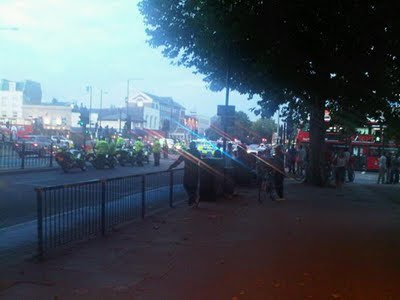 Scene at Mile End on 3rd September - the road is close

There was a heavy police presence in the Mile End Park area and on the a Mile End Road on Saturday evening. Platoons of heavily armoured police officers were seen in the park and a number of people detained – final outcome i.e. were they arrested is unknown.

It seems an English Defence League coach leaving London after Saturdays demonstration stopped outside the Mile End Mosque. There were signs of a disturbance in the area. Also in Stepney Green an EDL coach broke down and was attacked by about 100 Asian teenagers who pelted it with bricks and stones, The coach was carrying 44 EDL members when it stopped. It was later escorted away empty by police with three broken offside windows. The EDL passengers were transferred to a requisitioned No. 205 bus.

BBC reporter Paraic O’ Brien reported that “It was extremely tense and if that number of officers had not arrived it could have gone the other way and become a major incident.” (see report here)

We have tried to piece together what happened from news articles, tweets and eye witnesses – read it here on the MERA News Blog.

Below video taken on the scene showing EDL being transfered to a TFL bus. (Contains strong language) Click here for video of the 205 bus being escorted through Mile End.

Further images of the disturbance at Stepney Green and Mile End. 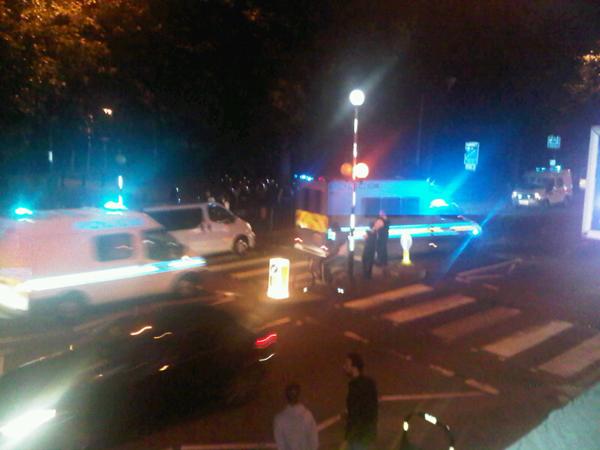 Police vans in Burdett Road - next to Mile End Park Blocks of concrete from temporary fencing left strewn around on Mile End Road.