The Home Office has announced the rollout of a new online crime-map service for England and Wales that ministers describe as “more comprehensive than any other scheme” in the world. The new mapping service offers crimes arranged by street, rather than merely by ward or subdistrict as before. The online portal, available from today (Tuesday 1st February) at www.police.uk, allows users to access a local crime map (provided via Google Maps mashup) by simply typing in an address or postcode. The exact locations where crimes have occurred aren’t given: rather the number of crimes occurring “on or near” given streets are shown, broken down into sections in the case of long streets.

In addition to the crime map, the portal offers details of the local police Safer Neighbourhoods Team, nowadays intended by the Home Office to be local residents’ first point of contact with the cops, and of meetings and briefings they will be holding in the area. (SNTs are headed by a police officer, but a majority of the personnel are Police Community Support Officers, PCSOs – uniformed patrol personnel without powers of arrest).

Reports shown on the map are broken down into six categories: violent crimes, burglary, robberies (ie muggings), vehicle crimes and “other” crimes, as well as reported cases of antisocial behaviour.

and click here to see a break down street by street.

More about our Neighbourhood Policing Team here. (This one works!) and comments on eastlondonlines.co.uk 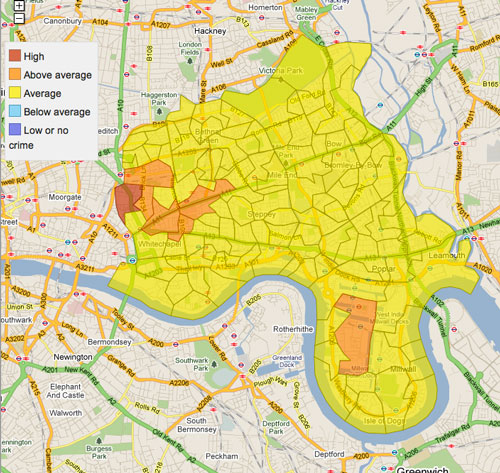